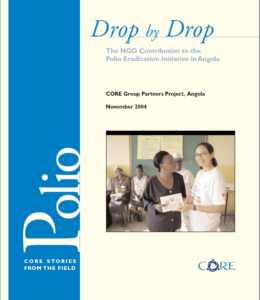 DESCRIPTION
Since 1988, the Global Polio Eradication Initiative (PEI) has worked to eliminate polio from all endemic countries. By increasing the coverage of routine immunization, organizing National Immunization Days, and developing surveillance for acute flaccid paralysis (AFP), the PEI has reduced the world’s incident cases by more than 99%. Between 1988 and mid-2004, the number of countries endemic for polio dropped from 125 to 6. However, the disease remains endemic in parts of Africa, the Indian subcontinent, and the Eastern Mediterranean. This document is the result of a 10-day qualitative methods and “case story” writing workshop carried out by CORE’s Angola partners in March 2004. Workshop participants sought to answer a number of questions surrounding immunization efforts that are not routinely documented by NGOs or academic journals. Tis case-studies answeres some of these questions.